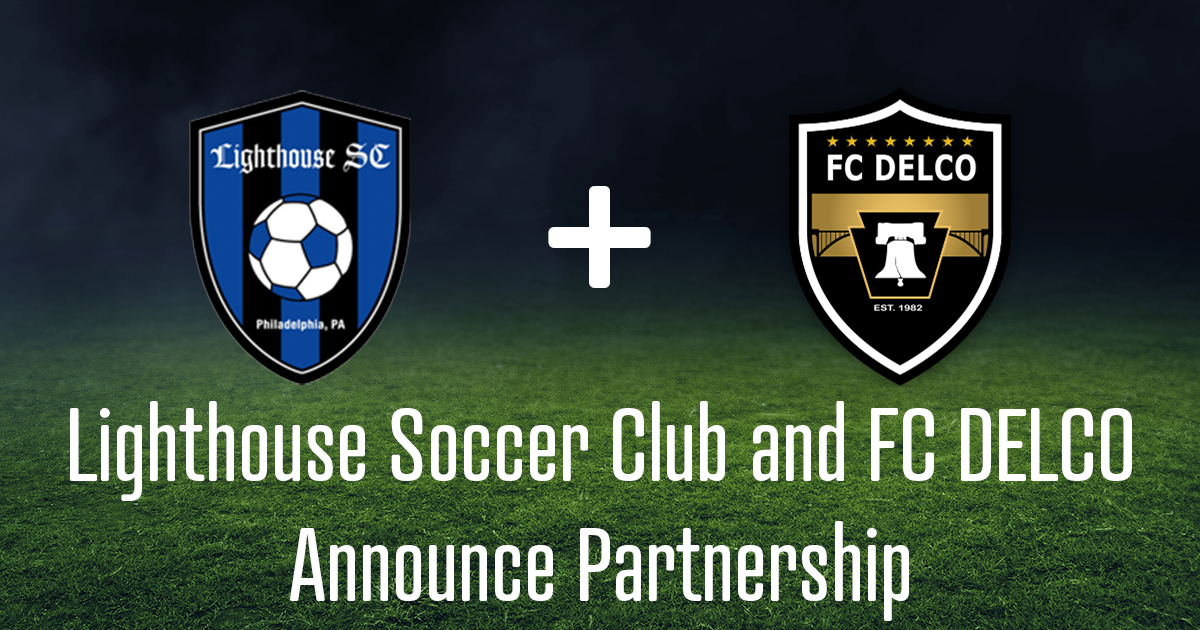 by Admin
No Comments

CONSHOHOCKEN, PA, - March 10, 2021, Lighthouse Soccer Club and FC DELCO are pleased to announce a formal affiliation between the two clubs in an effort to evolve soccer in the Philadelphia region and give more players access to play at the highest levels of youth soccer in the country.

"We’re honored and proud of this new relationship between two organizations with comparable missions and legacies,” mentions Samuel Lee, President of Lighthouse Soccer Club. “I’m encouraged and excited for the continued opportunities for kids and families, which will certainly be enhanced through this connection,” adds Lee.

"Lighthouse SC and FC DELCO both have an iconic history in Philadelphia and the country,” says FC DELCO General Manager, Rob Elliott. “We look forward to this new relationship as we continue to evolve soccer in the region and make new history,” adds Elliott.

FC DELCO and Lighthouse FC have been competitors for quite some time. And now, the two clubs will be partners, working together to provide more players with a pathway to the highest level of play. Lighthouse is Philadelphia’s oldest youth soccer club and has served the community since 1897. Membership in Lighthouse SC reached nearly 20,000 in 1924, and by 1940, the premier club was the largest single soccer organization in the world. In 1952, after winning the English League, Manchester United came to the United States and played at Lighthouse’s facilities in front of 3,000 fans. Lighthouse has almost as many stars to its name as DELCO, having won national championships in 1948, 1949, 1957, and 1967.

About Lighthouse SC: Lighthouse Soccer Club, Philadelphia’s oldest youth soccer club, is a not-for-profit youth soccer organization that sponsors programs for over three-hundred youngsters between the ages of 5 to 18 years old. The club also fields Men's Open and Women's Open teams, which compete in the Inter-County Soccer League. Lighthouse SC has won five national championships and was inducted into the Philadelphia Sports Hall of Fame in 2010. To learn more, visit lighthousesoccer.org

About FC DELCO: As Pennsylvania’s premier football club with deep roots in the community, FC DELCO offers an unprecedented playing experience that inspires creativity and competitiveness to further develop the child and the player. Our nationally recognized program has won eight national championships, countless region, and state titles, and has placed more players in NCAA collegiate programs than any other club in Pennsylvania. Additionally, we have multiple alumni playing in the MLS and professional women’s leagues. To find out more, visit fcdelco.org

About Us | Our History | News | Coaches & Volunteers | Contact Us | Donate